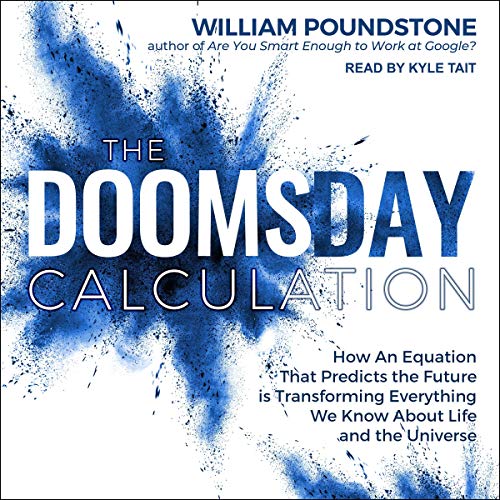 Written by: William Poundstone
Narrated by: Kyle Tait
Try for $0.00

In the 18th century, the British minister and mathematician Thomas Bayes devised a theorem that allowed him to assign probabilities to events that had never happened before. It languished in obscurity for centuries until computers came along and made it easy to crunch the numbers. Now, as the foundation of big data, Bayes's formula has become a linchpin of the digital economy.

But here's where things get really interesting: Bayes's theorem can also be used to lay odds on the existence of extraterrestrial intelligence; on whether we live in a Matrix-like counterfeit of reality; on the "many worlds" interpretation of quantum theory being correct; and on the biggest question of all: how long will humanity survive?

The Doomsday Calculation tells how Silicon Valley's profitable formula became a controversial pivot of contemporary thought. Drawing on interviews with thought leaders around the globe, it's the story of a group of intellectual mavericks who are challenging what we thought we knew about our place in the universe. The Doomsday Calculation is a must-listen for anyone interested in our culture and its future.

What listeners say about The Doomsday Calculation

it would take me a lifetime to gather enough clarity to wrap my head around this problem. The fact that the greatest minds in human history still struggle with this concept makes me feel a little better about that.

Yes, some of this was made so the layperson would understand the basics....but after a few chapters it does delve deeper into nearly every aspect both old Copernican theories and of course those newer ones by Bostrom Gott and Tegmark.

Funny, halfway between science and entertainment

The Doomsday Argument delves into probability to predict the number of future human beings given an estimate of the total number of humans born so far. However, you can translate with some modifications this thread of Bayesian reasoning to other fields. Thus, you can offer odds on almost any future event and understand why a generic guess, estimation, or prognostication has failed. You need a great deal of attention to grab the message the author sends, but little prior knowledge is required. The content is an appealing result, even though I cannot see the criterium for ordering chapters and grouping content.