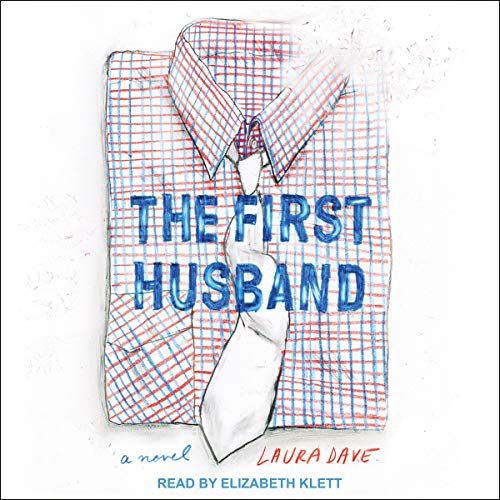 Written by: Laura Dave
Narrated by: Elizabeth Klett
Try for $0.00

A savvy, addictive novel about a woman torn between her husband and the man she thought she'd marry.

Annie Adams is days away from her 32nd birthday and thinks she has finally found some happiness. She visits the world's most interesting places for her syndicated travel column and she's happily cohabiting with her movie director boyfriend Nick in Los Angeles. But when Nick comes home from a meeting with his therapist (aka "futures counselor") and announces that he's taking a break from their relationship so he can pursue a woman from his past, the place Annie had come to call home is shattered.

Reeling, Annie stumbles into her neighborhood bar and finds Griffin - a grounded, charming chef who seems to be everything Annie didn't know she was looking for. Within three months, Griffin is Annie's husband and Annie finds herself trying to restart her life in rural Massachusetts.

What listeners say about The First Husband

The he said...I said.. was over done and so annoying, making it hard to listen to.

The book itself was ho hum. Lots of loose ends, like, what was up with her boss in the bar in England? I thought that was going somewhere.
But the narrator...I’ve listened to hundreds of audio books. I don’t say this lightly, that was the worst narration of all time. Could hardly get through the very stilted reading.

The reader is annoying and the story is trite
Worst listen I’ve had in a long time.

Middle of the Road

Another step – and my penultimate one – down my somewhat-random-and-not-entirely-reasonable recent trek through Laura Dave’s books. The First Husband is third in her repertoire, and my fifth of her books, after The Last Thing He Told Me (her 6th), London Is The Best City in America (her 1st), 800 Grapes (her 4th), and Hello, Sunshine (her 5th). It feels important to clue everyone up on this order – both mine and hers – because her final two were definitely my favourite of the bunch (with Sunshine being my personal choice).
If you’re coming to First Husband already a fan of Dave’s, then it’s fairly enjoyable. Annie, the main character in this outing, is trying to find herself. She is a little less in-depth than some of Dave’s other protagonists, perhaps in an effort to give her more relatability to a broader swath of readers. Griffin, the husband she married in a six-month rebound after ending a long-term relationship with Nick, is a likable chef with more personality than some of the other men Dave has written. This book is nowhere as good as Sunshine or Last Thing, but I liked it far, far better than London. I found myself surprisingly amused by some of the dialogue, enjoying some of the side characters (particularly Peter, and the briefly-seen Melinda).
I didn’t like Annie. I suppose I should be used to that by now – most of Dave’s books have centred on a female character I haven’t liked. Annie is self-centred, immature, indecisive and often moping. Everything she does focuses on her and her feelings, and rarely on others (until they directly impact her life). She fails to ask basic questions, and then gets angry that she doesn’t have the answers. She is directionless, and then surprised to find she is lost. All these men throughout the novel fall all over her, despite her apparent lack of any particularly noteworthy or interesting traits. And though her profession apparently plays a huge role in her figuring out her life/marriage/who she is, we don’t see her actually engaging in it until the very end (actually, I’d forgotten what it is she does until she gets fired and then unfired in the novel’s third act). I also didn’t like Jordan -the best friend who really steps out of line several times in this novel. But she, like most of the non-Annie characters in this book and many of Dave’s supporting cast members in every novel, is underdeveloped and serves mainly as a backdrop to Annie’s life.
The other thing about this novel that really got to me is the repetitiveness. There are so many ‘he said’ and ‘she said’s used in this book, I was actually distracted in the audiobook holding my breath for the next one to fall. A few of Dave’s ingrained bad habits are present here too – the tendency to use ‘I wish I could explain’ or ‘I wish I could say’ to short-cut or emphasise actual description, the pacing difficulties, teetering between describing each meal in excruciating detail and suffering white-room syndrome. I also noticed a lot of repetition from her other novels: the tendency to integrate food into everything (not necessarily a draw-back, but it is a bit repetitive), the seeming need to introduce British and/or Australian characters into each supporting cast (this book had both, though at least the narrator could do passable accents), the aforementioned tendency to give the main-character a personality that’s hard to root for; the need to force semi-cliché quotes into scenes they don’t belong for, with the express purpose of trying to seem ‘deep’.
A more casual reader looking for a light ‘beach book’ might have found a bit more enjoyment in this novel than I did. Not a bad read, but not a great one either. For Dave, it rides about middle of the pack.

constantly he said, she said. very annoying. no different voices to identify characters. took away from the story which wasn't bad.

the book was similar in ways to her other book. the narrator's pronunciation of T's and D's was too pronounced and was annoying. the characters were silly at times but not in a fun way.

I just got to part 3 and I’m just bored. I keep waiting for something interesting to happen, some kind of major drama bomb to go off and it just keeps dragging on. The title makes you think the this first husband will have a huge secret or turn out to be a completely different person with a secret life or something interesting and so far, nothing. It’s just kind of boring.

The story was not that great, especially compared to Laura Dave’s recent book. The reader sounded like Amazon’s Alexa! Her voice annoyed me and made the story hard to take.

The story was only ok. I loved Dave’s 800 Grapes & The Last Thing He Told Me, so I kept going and expecting the story to get better, but it was overall very bland.

I love Laura Dave books. This was not my favorite, but was still enjoyable. However I almost put it down several times because of the performance. The voice of the narrator was difficult for me to listen to. Unfortunately it took away from the book.

The narration ruins it

How did she get this job? The writing is good. The reading is stilted and she over pronounces her Ts and Ds. Almost gave up multiple times due to the reading. Be forewarned.