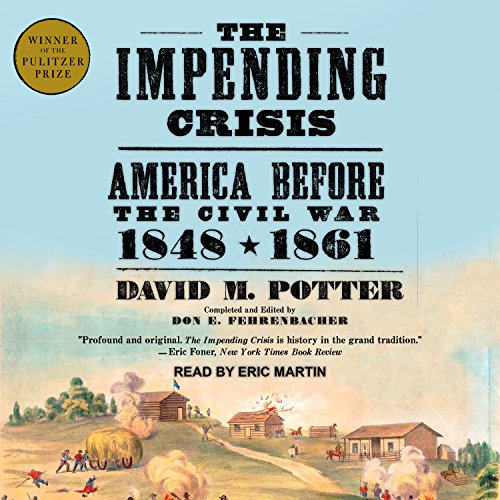 David M. Potter's Pulitzer Prize-winning The Impending Crisis is the definitive history of antebellum America. Potter's sweeping epic masterfully charts the chaotic forces that climaxed with the outbreak of the Civil War: westward expansion, the divisive issue of slavery, the Dred Scott decision, John Brown's uprising, the ascension of Abraham Lincoln, and the drama of Southern secession. The Impending Crisis remains one of the most celebrated works of American historical writing.

"David M. Potter's magisterial The Impending Crisis is the single best account to date of the coming of the Civil War." ( Civil War History)

What listeners say about The Impending Crisis

There is much detail on the nature and structure of the sectional crisis in the years between Mexico and Fort Sumter.

Missouri Compromise, Kansas-Nebraska, demise of the Whigs, ascendancy of the Republicans, and the ambitions of the South explained.

Finally, you get a very detailed explanation of the 1860 election that led to Lincoln and why that was so alarming to the South.

This is a quality history book.

the best book on this period, still

written many years ago, but it is stil by far the best on the subject

Not a primer, but will answer all your questions

I have been trying to make sense of the run-up to the Civil War for many years, but every book leaves so many tantalizing questions unanswered. What happened to the Missouri Compromise? How did the Whig Party fall apart? Where did the Republican Party come from all of the sudden? Were Presidents Pierce and Buchanan really as bad as everyone says? Was Chief Justice Roger Taney of the Dred Scott decision as backward as he is typically depicted? This books answers these and many other questions with clarity and in great detail. Because of the detailed approach, I would not recommend this book for someone just beginning to learn about the Civil War and preamble. There are broader and more concise surveys that would be better to start with. But if you have gotten to the point where you are asking questions, this book is perfect.

Read and loved the book years ago and thought the audiobook would add to my understanding of the era. Not that the narration was bad but I was easily distracted. Subject material just lends itself better to print instead of listening, at least that was the case for me.

A Slog for Sure

While the book has several interesting points to make about the factors that lead the Antebellum U.S. to Civil War, its narrative is weak at best. There is tenuous cohesion between chapters, themes and its chronology often doubles back on itself confusingly. It's as if the authors stitched together a number of academic essays with the common thread of "Impending Crisis" woven throughout. These essays often digress into pedantry that distracts from the whole. maybe this was meant for history buffs who aren't interested in a narrative of these years and are instead looking for an granular (if disjointed) analysis.
Despite my strong interest in the subject, I felt like I was not the intended audience for this book - even more so as this book doesn't seem to be an effective audiobook. Too many digressions and unexplained references. I finished it, yes, but it was a slog for sure.

loved the history, had to speed up the narration.

Filled with great history! Very well written. The narrator was way too slow! I look forward to reading more of his books.

Remarkably well researched, insightful analysis, and very well written. After listening to the audible version, I had to add the book to my library as a source for future reference.

For American history devotees, this is a must read. A worthy Pulitzer winner. Should be required reading in all US history classes. Fascinating how many themes and American politicians were included in this narrative. Very ably narrated.

This is an outstanding political history of the years from the Polk administration to the surrender of Fort Sumter. The author presents a detailed examination of the federal, state and territorial struggles between the sectional forces striving for continuation and expansion of slavery and those fighting for containment and abolition of the institution. Narration is excellent. This is not a listen for anyone looking for an overview; treatment of the various crises during this critical period leading to the Civil War is painstakingly researched and presented. I recommend it to those looking for an understanding of how America arrived at the bloody war that followed Lincoln’s election in 1860.

This is a great book. It’s a perfect mix of narrative and analysis of the dozen years leading up to the Civil War. It was written in 1976 and so I would say that the tone is occasionally dated but not the scholarship.