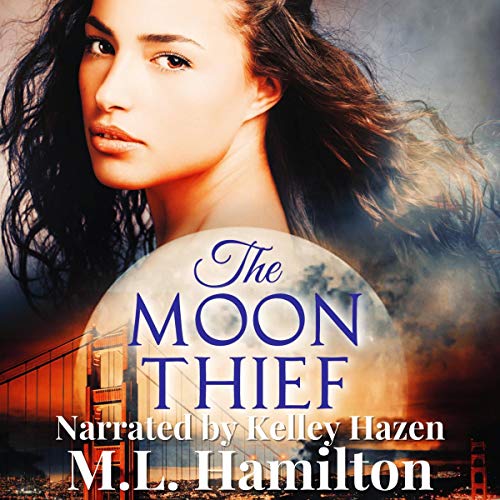 Breanna Perry has met some interesting people in her time as a psychiatrist for San Quentin. There was the guy who ate his mother for Christmas or the postal carrier who claimed Jesus told him to put ricin in the fashion magazines he delivered. However, nothing prepared her for Cassius Teran.

Named for one of the conspirators against Julius Caesar, Cassius believes he’s no longer human. Of course, the world isn’t ready for people who think they have special abilities, and Breanna is now tasked with curing Cassius of his delusions before he winds up in San Quentin forever.

However, when a strange man starts following Breanna, she has to face the reality that the world might be a bit more complicated than she originally thought, and under the moonlight, strange and wonderful creatures lurk in the shadows.

What listeners say about The Moon Thief

Ms Hamilton is one of those writers whose books I'll grab without much hesitation. She's a great story teller and writes mostly in two of my favourite genres: mystery/crime and fantasy/paranormal. When she combines the two, you can be sure you'll get a great story with crazy ideas made seem realistically possible...:)

The new series definitely proves this theory:) The first book of the new trilogy introduces us to Dr Breanna Perry, a psychiatrist working on a daily basis with criminals - the inmates of San Quentin, to be exact - so she's not a woman who gets easily scared. But when she is involved in a car accident which almost ends her life and then miraculously comes back to full health in not more than two weeks, well, nothing is as it was before any more... The strange events, things she can now do, unexplained small incidents - all this seems to get to her...

I must admit that Brea is not an easy character to like all the time:) Sometimes her reactions and behaviour kind of irritated me but then I though to myself, well, she had the right to react like that - would you behave differently in her shoes? And the answer was always, No, I would do exactly the same (probably:))- so there you go:)

But on a more serious note, the plot is really fast, with the paranormal elements woven into the story in such a way that you do not doubt or question their logic (unless you're a scientist, probably, or an expert in any field of biology, medicine, psychiatry, physics or whatever field of science you may think of, that is - I'm not, so I believe all the explanations there, they make sense for me:)). I also like the characters created by Ms Hamilton - and I don't mean in the sense I think they would be great friends; I like the way they are constructed; not all are amicable and friendly, some are grumpy, some irritating, some are simply vile and some quite nice - but they all feel real, three-dimensional people.
Another thing I like is the pace of the story - it starts off quite slowly, quietly in a sense, and then it speeds up until the last chapters feel like a rollercoster ride... It's a great ending, making you want to jump right into book two:)

As usual, narration by Ms Hazen is almost impeccable, She has to voice quite a bunch of characters, but she's a master of that and can do that with her eyes closed. All are recognizable and their personalities come out perfectly to life. It's another great co-production of Ms Hailton and Ms Hazen:)

DISCLAIMER: I was given this free review copy audiobook at my request and have voluntarily left this review.

Loved this wonderful story of Fantasy. The characters and their interactions make the story. The narrator made the story totally enjoyable.

The Moon Thief (The Moonlight Trilogy Book One) was a good read by M.L. Hamilton. Breanna Perry is a psychiatrist for San Quentin. Nothing in her time there prepared her for Cassius Teran. Cassius believed that he's no longer human. Breanna must cure Cassius of his delusions before he goes to San Quentin forever. A strange man starts following Breanna, and she must come to terms with the fact that the world may be more complicated than thought. She has to come to terms that under the moonlight there may be strange creatures in the shadows. I enjoyed this book and can't wait to read more in this series. I enjoyed the life that Kelley Hazen brought to the characters.

M.L. Hamilton has done it again! I’m so excited that there’s a new series to enjoy. I highly recommend The Moon Thief, the first book in The Moonlight Trilogy.

After a near fatal accident, and barely holding on in the hospital, Breanna answers one simple question, “Do you want to live?”. Her answer changes everything...

There’s no better way to experience an ML Hamilton story than by popping in the ear buds and listening to Kelley Hazen perform. The characters all come alive and it’s like watching the story play out in my head. A truly enjoyable experience!

Do you want to live?

I really enjoyed this new book by Hamilton and hope it is a series on audible. Loved the characters of Breanna, Cassius, Derek and Clara. Both Cassius (an ER doctor) and Breanna (a psychiatrist) experience near death and Cormac asks do you want to live, both eventually recovers at rapid and develops special powers and glowing eyes .I was given this free review copy audiobook at my request and have voluntarily left this review. THANK YOU

I was voluntarily provided this free review copy audiobook by the narrator and found it extremely entertaining. This is the first book in a brand new series and it was excellent. Almost dying can be a new start for your life if you're lucky sometimes or unlucky depending on your outlook. Just imagine having a car accident and then waking up as super hero. The characters have unique and interesting personalities and the story line is intriguing and is wide open for interesting plots and mysteries. The author has a special talent to create characters and stories that feel real and the narrator brings every story to life. This combination of author and narrator creates pure enjoyment. Looking forward to book 2.