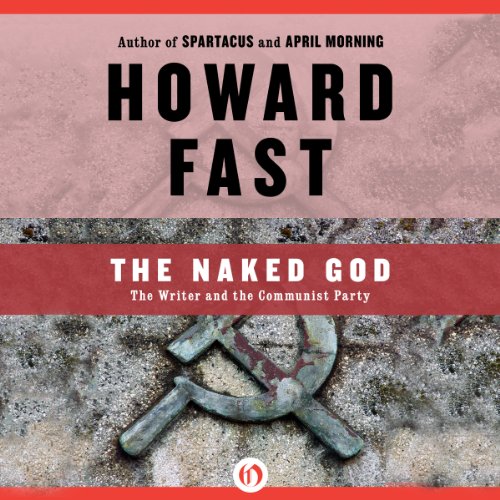 Written by: Howard Fast
Narrated by: Christopher Kipiniak
Try for $0.00

Fast's audiobook on his break with the Communist Party, and a riveting tribute to the importance of justice and beauty over dogma and rigidity.

The Naked God is Howard Fast's public repudiation of the Communist Party, of which he was a devoted member for thirteen years until reading about the full scope of atrocities committed by the Soviet Union under Stalin. The bestselling author of Spartacus and Citizen Tom Paine, Howard Fast lent his writing talents and celebrity to the communist cause as a steadfast advocate and public figure. However, he felt increasingly ill at ease with the superior manner Party leaders took with rank-and-file members and with rumors of Soviet anti-Semitism. In his first audiobook after officially leaving the Party in 1956, Howard Fast explores the reasons he joined and his long inner struggle with a political movement in which he never felt he truly belonged.

What listeners say about The Naked God

Published in 1957 this book is a passionate and brilliant description as to why Howard Fast joined the Communist Party, his experience in it and why he left. Most importantly the book is an attempt to look deeply at the conflicts felt, especially by writers in the the CP, in relation to the deadening culture of the Party, the compromises the writers made to stay in the Party and how the truth of the horrors of Stalin as portrayed by Khrushchev in his speech at the 20th Party Congress made further compromise impossible for many including Fast. It is a complex story that rings true.

This story has important lessons for every political view point! I see the same authoritarian actions and attitude unfolding in the American political landscape. Today leaders become sort of God like, and no one is telling them ” Hey you really are Naked underneath them clothes, and it is not pretty!”
We need to hold all manner of leadership to a higher accountability before the system becomes entrenched! Before the secret police comes knocking at our door!

Fast reveals the literal skeletons in the Communist closet as only a trained Marxist can. The same quasi-religious methods of the American Communist Party of the 1930s-50s are being used by the Democrat Party, BLM, and “useful idiots” today. Naked God is a warning and should be required reading for anyone attempting to understand the scourge of Marxism. Speed up the narration for a more conversational experience.