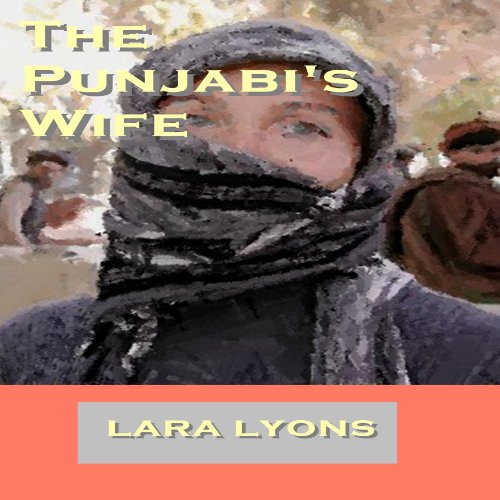 Written by: Lara Lyons
Narrated by: Catherine O'Brien
Try for $0.00

In 1968, a naive 19 year old Midwestern girl marries an older Pakistani man and moves to Lahore where she lives as a Muslim wife for almost two years. She did not realize that her new husband married her to gain American citizenship and return to the United States. Her life in Pakistan is adventure-filled: shopping bazaars, dancing girls, an Islamic red light district, historical Moghul architecture, and social turmoil. Over time these Pakistani experiences reveal how Muslims control and mistreat their women.

The danger of fanatic Shiite religious practices and exciting travel are all balanced with her status as a blond American woman in a foreign land at the mercy of her Muslim husband. This true story unveils an informed observation of Muslim women's status in Pakistani society. The Punjabi's Wife is a book that asserts itself as a true American odyssey, a brave young woman's adventure story and lessons for western women contemplating relationships with Muslim men.

What listeners say about The Punjabi's Wife

Would you try another book from Lara Lyons and/or Catherine O'Brien?

Although not much of the cultural experiences are new now (I believe this marriage took place in the 1970s) it's still interesting as an autobiography of a mid-western girl who experiences a culture that is foreign to her.

Who would you have cast as narrator instead of Catherine O'Brien?

I'm not familiar with narrators, but for starters it seems a mistake to have cast someone with a British(?) accent. It was really distracting to keep hearing her refer to her hometown and background with the ill-fitting accent. I feel that she should have tried for an American accent, or that someone else should have been cast.

Also,this isn't the narrator's fault but did no one edit this thing? As the other reviewer mentions, at a certain point early on we begin hearing coughs, throat clearing, weird clicks and maybe tapping on the microphone. Of course that was annoying but also rather jarring. I'm not crazy about unexpected loud noises in my ears, and from that point forward it's been hard to relax and enjoy the book.

Well, it was a little interesting. I got it because I'm normally interested in other countries and cultures, and I was disappointed on that level, but as a personal story of one woman's experience it was OK. Can't really recommend, unless it was offered for a couple of dollars or something.

The Narration is Terrible!!!!

If you are someone who can get past the narrator, then this book may be okay for you. I never could get past it to focus on the content.

Has The Punjabi's Wife turned you off from other books in this genre?

First of all, she has an accent (possibly British?), but this is an autobiography and as far as I could tell the author is American. That was distracting. Second, her reading is very flat. Third, you can hear her swallowing throughout, which I think a little gross. Fourth, about the 4th chapter she starts coughing and making reading errors that clearly should have been edited out. It's extremely unprofessional. That's when I had to stop listening. So maybe the book is terrific, but I'll never know.