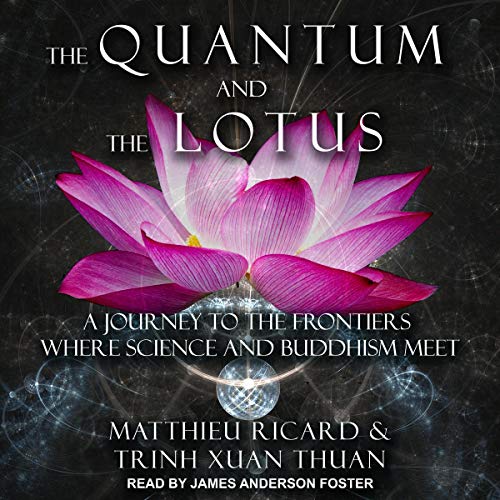 The Quantum and the Lotus

Matthieu Ricard trained as a molecular biologist, working in the lab of a Nobel prize-winning scientist, but when he read some Buddhist philosophy, he became drawn to Buddhism. Eventually he left his life in science to study with Tibetan teachers, and he is now a Buddhist monk and translator for the Dalai Lama, living in the Shechen monastery near Kathmandu in Nepal. Trinh Thuan was born into a Buddhist family in Vietnam but became intrigued by the explosion of discoveries in astronomy during the 1960s. He made his way to the prestigious California Institute of Technology to study with some of the biggest names in the field and is now an acclaimed astrophysicist and specialist on how the galaxies formed.

When Matthieu Ricard and Trinh Thuan met at an academic conference in the summer of 1997, they began discussing the many remarkable connections between the teachings of Buddhism and the findings of recent science. That conversation grew into an astonishing correspondence exploring a series of fascinating questions. Did the universe have a beginning? Might our perception of time in fact be an illusion, a phenomenon created in our brains that has no ultimate reality? What is consciousness and how did it evolve?

What listeners say about The Quantum and the Lotus

As a scientist I confess I was skeptical of how much I would get out of this book even though I did have some curiosity about how these two highly qualified authors would deal with the different approaches and assumptions of their professional fields. But I found myself drawn into their discussions more than I expected and learned a great deal about how much the contemplative approach shared with
the scientific one and how each could learn from the other.

This book broke my brain!!!

Couldn't get past chapter 10. Please refund my credit. I got too anxious trying to keep up.

The narration was terrible. It was too fast and the narrator actually sounded bored with the content. There was one point where I could almost see him rolling his eyes. Ricard was guilty of making the same apriori statements that he criticized scientists for making. He frequently made unsubstantiated assertions with the only proof being it made no sense. Obviously what makes sense or doesn't make sense to him is his own mental construct.