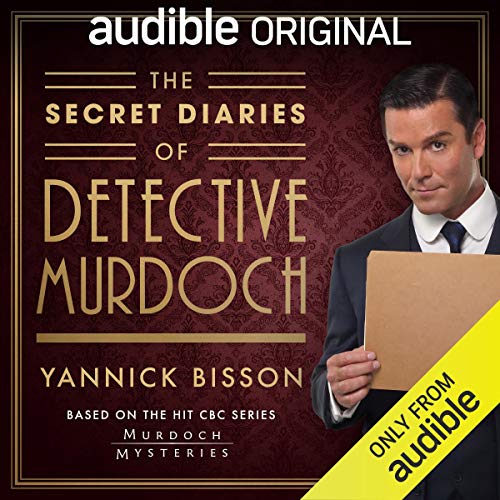 The Secret Diaries of Detective Murdoch

Written by: Various writers
Narrated by: Yannick Bisson
Try for $0.00

The Best Fiction Podcasts for Listeners Who Love a Good Story

You can’t beat a good story. Luckily, humans are great at storytelling, and the best fiction podcasts are all the proof that the modern listener requires. Get the popcorn ready; it’s storytime.

Yannick Bisson is best known to global audiences for his long-running role as Detective William Murdoch on Canada’s most-watched drama, Murdoch Mysteries, which is currently in Season 13. With over 60 film and TV credits to his name, Bisson is a multiple award-winning actor, recently starring in the films Another Wolfcop, Casino Jack and Year by the Sea. In 2017, Bisson was honoured with the ACTRA Award of Excellence for his outstanding contributions to the industry. A dedicated humanitarian who has made meaningful connections to several philanthropic organizations, Bisson is involved with Artists for Peace and Justice, helping communities in Haiti; Camp Ooch, Boost for Kids and Childhood Cancer Canada. A Montreal native currently residing in Toronto and Los Angeles, Yannick Bisson is married to actress, author and producer, Shantelle Bisson, and raising three daughters, Brianna, Dominique and Mikaela.

What listeners say about The Secret Diaries of Detective Murdoch

Great companion to the series!

If you love the show, you'll enjoy hearing Detective Murdoch's secret diaries. I, especially, like the addition of audio clips from the television episode that relate to the particular entry.

Good stories, some better than others

Great narration. We Two, My Father's Son and Two Ways of Knowing are my favorites. These explore the tension of human heart.

Love the recaps, the audio snippets from the show AND Yannick's voice. Could listen and re-listen all day!

I love Murdoch Mysteries! This was an amazing companion. PLEASE make another season! I was so upset when I finished it because I wanted so much more!

I am really enjoying this series - the ‘inside’ look into Murdoch, the man. Yannick Bisson does great narration and the observations are like re-living television episodes from a new perspective. I truly hope this series continues.

Always Enjoyed Murdock Mysteries, this was a great way to continue on while driving! Thanks!

A must-listen for any Murdoch Mysteries fans

Loved it. I hope there will be more. I thoroughly enjoyed it. love Murdoch mysteries.

Being my first audio book I didn't truly appreciate it at first. However, after sampling some others, it is now one of my favorites. Yannick is a great narrator and I loved the sound effects and "reenactments". It gets rather philosophical but I suppose that is what you should expect from someone's diary. The first couple chapters were rather depressing but the adventure picked up after that. Overall, extremely entertaining and I would definitely recommend.

this is a treat for all Murdoch fans. I couldn't stop. l was fascinated by his views.

As good as the show

It is almost better than the show since Murdoch has only words and no acting to tell us his story.

Excellent look into the psyche of a deeply humbled man. You will definitely look at Murdoch Mysteries in a new and revealing light.

I thoroughly enjoyed hearing from Murdoch reading from his diary. An intimate look at the detective, performed perfectly by Yannick Bisson.

These "diary entries" bring to light a depth of character and evolution unavailable in the video episodes. By "watching/listening over his shoulder" to Detective Murdoch we are inviting ourselves to descend into moral/ethical/philosphophical inquiry that is both gentle and remarkably profound in its simplicity!
Keep them coming!

I enjoyed this overview - especially as it was narrated by the TV Series actor. I am sure if I can catch any of the episodes on Ovation now, I will be a lot more oriented to what is going on in the episode. ....looking forward to more of both.... I might even look for the book(s).

I think this is a fine addition to the Murdoch experience! I enjoyed it very much.

I enjoyed the whole performance. The seens were so vivid that I felt like I was there part of the seen.

Yannick Bisson does an amazing job to refresh and review many of our favourite Murdoch Mystery episodes, keeping the listeners engaged with his skilled and enjoyable voice. The writers have added in summaries, pulling themes and stories lines together, to create these audio-versions, thereby offering listeners more insights than we have available to us by just watching the TV shows. Thank you to all those involved in bringing these audio-versions to Murdoch Mystery Fans. Definitely five stars to Yannick Bisson for his excellent audio performances.

I have missed this show so much. It's a great add to my daily work out. Or, it WAS. More Murdoch, please!!