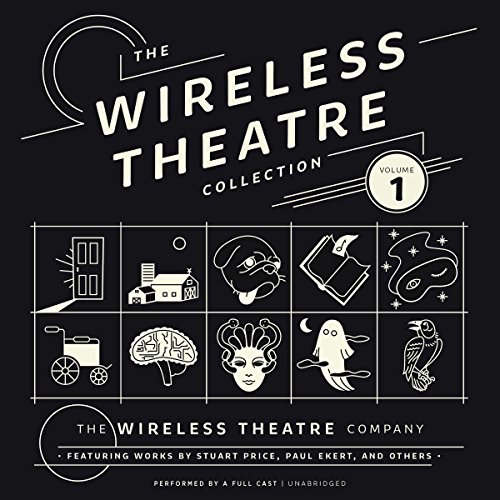 The award-winning and critically acclaimed Wireless Theatre Company strives to keep radio theater alive and well. From the hilarious to the terrifying, this diverse collection features 10 Wireless Theatre productions in a single volume:

In this hilarious British comedy, a mismatched bunch of oddballs and geeks, along with a borderline-psychotic television presenter, venture to a haunted inn in England to record the first-ever episode of Spook Squad - a groundbreaking television show investigating the bizarre, the mysterious, and the supernatural.

Since our bodies cannot genuinely explore space, why not get rid of them?

Without wanting to trot out the already tired clichés about social networking sites being our main interaction or point out that, with gaming systems becoming so sophisticated, the next generation will spend an overwhelming amount of time interacting through the Internet, it seems obvious to us that we are already heading for a "body-free" future. At first it seems awful, but when you think about it, it could provide many benefits once we get used to it.

Dream On by Paul Ekert, directed by Tom Brazier

Robert is having a dream about his dead ex-wife. The next night, there she is again, hauntingly familiar in the full personification of her monstrous personality. His current wife is unamused by his nocturnal flirtation with the dead past.

As dreams and reality begin to overlap, Robert begins a desperate hunt to find out why this is happening. Is he really losing his mind?

The Grimm of Stottesden Hall, written and directed by Stuart Price

Based on the works of Edgar Allen Poe, The Grimm of Stottesden Hall takes listeners on a journey of madness, terror, and gruesome murder!

Blighted by phonophobia, a history student takes refuge from the London din in a quiet bookshop off Charing Cross Road. There he makes a chance discovery: an old scrap of paper hidden in a dusty book. On that scrap is a code hiding a lost musical score - the last work of the evil Anton Valderberg Drache! With Halloween approaching, the student races to unlock the mystery, unaware of the supernatural powers he is about to unleash.

Medusa on the Beach by Marty Ross

Biddlecombe is a perfectly ordinary English seaside town - except everyone there has been turned to stone.

Two seriously out-of-their-depth police officers uncover the strange truth of what happened when middle-aged and romantically disappointed hairdresser Marjorie Briggs finds something in a polythene bag on the beach that didn't belong there - something ancient and terrible with the power to seriously muck up the lives of Marjorie and all those she loves and hates.

The Youth of Old Age, written and directed by Stuart Price

Wickedly acerbic, The Youth of Old Age shows acclaimed British actor Prunella Scales at her dragon-tongued best. As the story's matriarch, she's determined to prevent her heir from marrying "out of sorts".

What listeners say about The Wireless Theatre Collection, Vol. 1