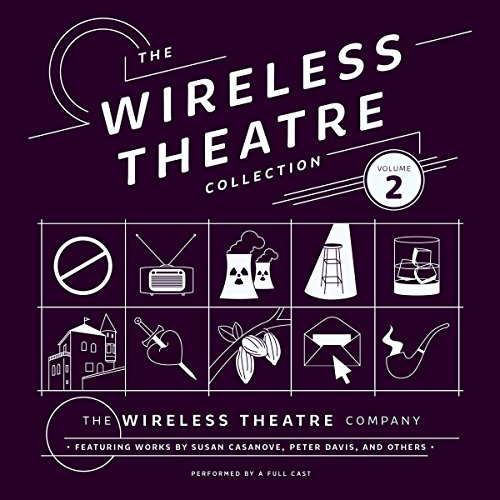 The award-winning and critically acclaimed Wireless Theatre Company strives to keep radio theater alive and well. From the hilarious to the terrifying, this diverse collection features 10 Wireless Theatre productions in a single volume:

We Are the BBC by Susan Casanove, directed by Jack Bowman

Rob Sterling Davies is on the crest of a wave - a celebrated scriptwriter, actor, television personality, the new doyen of Just a Minute, and apparently, Stephen Fry's new best friend. But all isn't quite as it seems, and when Stephen discovers that Rob's BAFTA-winning script was stolen, he undertakes to expose Rob for the fraud he is.

We Are the BBC is the follow-up to the hugely popular 2011 hit We Are Not the BBC, and features Nicholas Parsons and Stephen Fry as themselves.

We Are Not the BBC by Susan Casanove, directed by Jack Bowman

A light-hearted look at the radio drama production process, as seen by the members of an amateur dramatics society in a sleepy suburb of Swansea. It can't be difficult to make your own play for radio, can't it? And with a LAMDA-trained professional actor at the helm, surely nothing could go wrong? After their attempt at Mike Leigh - inspired improvisation doesn't exactly produce satisfactory results, things start to look up when a visiting celebrity agrees to step in and play the lead role.

No Cause for Alarm by Gareth Rubin

No Cause for Alarm is a silly play.

It has no comment to make about the human condition, love in the 21st century, or the Iraq war.

A savagely funny satire on celebrity and theater that garnered five-star reviews at its world premiere, Stage Fright charts the struggle for supremacy between three actors appearing in a play together: old friends Peter and Charles, and Geraldine, the young and vulnerable actress they have befriended.

As opening night approaches, it becomes apparent that Geraldine is not who she appears to be, and the friends must fight to salvage their pride, their identity, and their reputations in this thought-provoking tragicomedy.

The Mighty Carlins by Collin Doyle, directed by Paul Blinkhorn

On the anniversary of his wife's death, Leo Carlin and his two sons come together for their traditional night of sharing the good and not so good memories of the dearly departed Mrs. Carlin. Beers are drunk. Plans are hatched. Secrets are revealed.

The Mighty Carlins is a black comedy that celebrates a family at its worst.

Based on the true story of Countess Elizabeth Bathory, perhaps one of the greatest mass murderers of all time, a woman who tortured and killed over 600 young women for their blood

What listeners say about The Wireless Theatre Collection, Vol. 2

did not spark the imagination at all had no or very little background sound effects and the storyline mostlly weak.