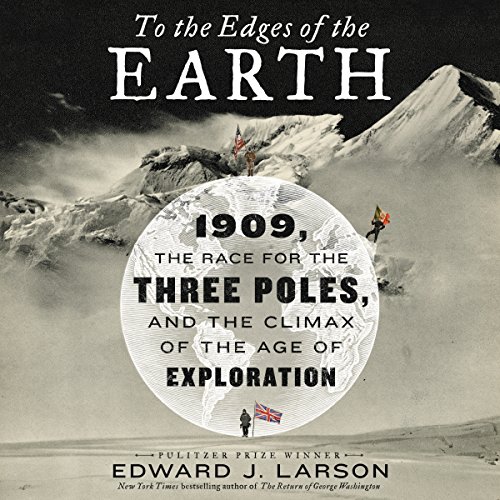 To the Edges of the Earth

1909, the Race for the Three Poles, and the Climax of the Age of Exploration
Written by: Edward J. Larson
Narrated by: Paul Michael Garcia
Length: 12 hrs and 6 mins
Categories: Sports & Outdoors, History of Sports

To the Edges of the Earth

From the Pulitzer Prize-winning historian, an entwined narrative of the most adventurous year of all time, when three expeditions simultaneously raced to the top, bottom, and heights of the world.

As 1909 dawned, the greatest jewels of exploration - set at the world's frozen extremes - lay unclaimed: the North and South Poles and the so-called "Third Pole", the pole of altitude, located in unexplored heights of the Himalaya. Before the calendar turned, three expeditions had faced death, mutiny, and the harshest conditions on the planet to plant flags at the furthest edges of the Earth.

In the course of one extraordinary year, Americans Robert Peary and Matthew Henson were hailed worldwide at the discovers of the North Pole; Britain's Ernest Shackleton had set a new geographic "Furthest South" record, while his expedition mate, Australian Douglas Mawson, had reached the Magnetic South Pole; and at the roof of the world, Italy's Duke of the Abruzzi had attained an altitude record that would stand for a generation, the result of the first major mountaineering expedition to the Himalaya's eastern Karakoram, where the daring aristocrat attempted K2 and established the standard route up the most notorious mountain on the planet.

Based on extensive archival and on-the-ground research, Edward J. Larson weaves these narratives into one thrilling adventure story. Larson, author of the acclaimed polar history Empire of Ice, draws on his own voyages to the Himalaya, the arctic, and the ice sheets of the Antarctic, where he himself reached the South Pole and lived in Shackleton's Cape Royds hut as a fellow in the National Science Foundations' Antarctic Artists and Writers Program.

These three legendary expeditions, overlapping in time, danger, and stakes, were glorified upon their return, their leaders celebrated as the preeminent heroes of their day. Stripping away the myth, Larson, a master historian, illuminates one of the great, overlooked tales of exploration, revealing the extraordinary human achievement at the heart of these journeys.

What listeners say about To the Edges of the Earth

amazing accounts from diaries, newspapers, m ed dia of its day and the old school tests and expectations of manhood