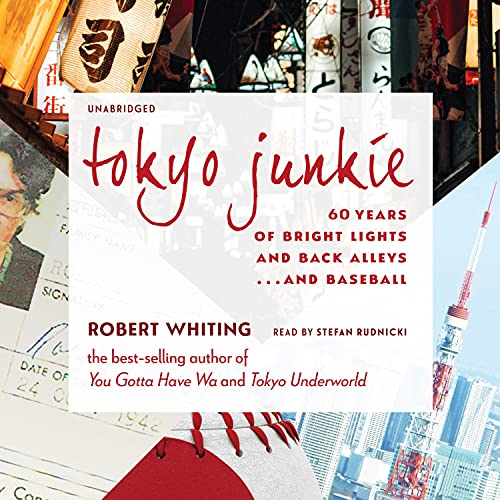 Written by: Robert Whiting
Narrated by: Stefan Rudnicki
Try for $0.00

Tokyo Junkie is a memoir that plays out over the dramatic 60-year growth of the megacity Tokyo, once a dark, fetid backwater and now the most populous, sophisticated, and safe urban capital in the world.

Follow author Robert Whiting (The Chrysanthemum and the Bat, You Gotta Have Wa, Tokyo Underworld) as he watches Tokyo transform during the 1964 Olympics, rubs shoulders with the Yakuza and comes face to face with the city’s dark underbelly, interviews Japan’s baseball elite after publishing his first best-selling book on the subject, and learns how politics and sports collide to produce a cultural landscape unlike any other, even as a new Olympics is postponed and the COVID virus ravages the nation.

A colorful social history of what Anthony Bourdain dubbed, “the greatest city in the world”, Tokyo Junkie is a revealing account by an accomplished journalist who witnessed it all firsthand and, in the process, had his own dramatic personal transformation.

What listeners say about Tokyo Junkie

Hated the way Japanese words were pronounced! It is a book about Japan and life in it. The narrator’s voice was okay, very masculine but his pronunciation of Japanese makes me distrust the words of the writer…

Listening to the Tokyo Junkie by Robert Whiting made me feel nostalgic. My husband lived in Japan for over a decade and I lived in Japan for a couple of years. My husband finished level I JLPT early on and was quite fluent in Japanese and so when I went to Japan, life was beautiful and I probably had least language hiccups. I started learning Japanese language within a couple of months of going there and finished my level V JLPT and then we moved out due to work.

While in Japan, I made a few good Japanese friends and got opportunities to enjoy Japanese Tea Ceremony. Learning the Japanese culture felt so joyous and exciting and life was always colorful, interesting and busy. We truly enjoyed our life in Japan. We went out very often, almost everyday, for a coffee and/or a small dessert. We also went out often for luncheons/dinners as the food always tasted delicious in Japan (we are now health & wellness oriented, we choose healthier food and eating habits, off of caffeine & sugars & fried foods altogether in all forms, compared to past, eat less outside, and now travel less often specially since pandemic). We traveled every 2-3 months visiting places in Japan. Surprisingly, looking back, the food choices outside weren't anywhere near healthy, though we ate more fruits & vegetables at home (interestingly, most fresh produce in Japan felt expensive, at least while we lived there). I am glad that the portion sizes were small and also that we had a very active lifestyle keeping us healthy and in shape.

I second Robert Whiting with regards to Tokyo cleanliness, honesty and integrity of people, organizing skills, hardworking nature, etc. I have had the opportunity to witness quite a few those impressive characteristics while we lived in Japan.
We have never seen another city till date as clean and tidy as Tokyo. Tokyo was also so safe that we walked after the movie dates on Fridays and/or weekends from Kawasaki to Kosugi (roughly about 8 km/5 mi) in the late nights, which were so wonderful and enjoyable. I miss the fun life and ease of just taking trains and visiting places. I miss visiting Japanese gardens and Shrines. Japanese gardens are very beautiful, picturesque and serene. Shrines are peaceful. And, as Robert says, it is just interesting how places like Shibuya or Shinjuku are so crowded and yet so organized. Despite such huge crowds, I have never once experienced accidentally bumping into another person irrespective of the crowd. However, it was worth staying cautious taking trains and being aware of other train passengers on Friday nights as few people would end up drinking too much and would just throw up in trains or train stations. Definitely, not so glorious a thing.

Until I started listening to this audio book, thought I understood well about Japan and Japanese culture from living in Tokyo. However, I must admit that I gained insights from this book into some of the stuff I didn't even know before listening to this book, either about Japan or Japanese culture. It also feels good to know about recent changes and updates in this decade in Tokyo. We always wanted to visit Tokyo in future and I am inspired to do so sooner than later listening to this book. Overall, it is a good audio book for someone who is curious about Japan, is going to live there or has lived there. Glad to have come across this audio book and having listened to it. Hopefully I will read/listen more books by Robert Whiting in the future. Also, good narration by Stefan Rudnicki, some of his Japanese pronunciations were spot on. :)

Part historical account of Tokyo rebirth and growth, part autoradiography, part social commentary. even when the book discussed topics i am familiar with i was still engaged and interested what the author has to say

Excellent book but I cannot excuse the horrendous butchering in the pronunciation of Japanese words and phrases.

This is one of the best books I’ve listened to this year. I got it through Audible Plus but would gladly have paid a credit for it (not something you can usually say about a Plus selection).

I’ve read the author’s previous book about Tokyo and enjoyed it immensely. This book is part memoir part history of postwar Tokyo up to 2020. The author’s had a fascinating life, of the type that would only have been possible for a brief moment in history.

Loved the personal content! Very good ! I learned so many new things…I will recommend it to my friends. The story was
All new. Loved the narration too.

It was a great recollection of a life lived in Japan. I highly recommend it to anyone interested in the country.

Now I must visit Tokyo

Excellent book all around. Please release some more of Mr. Whitings book on your site!!

One of the best books I have ever read

Mr Whiting wrote an incredible book, I loved it. Definitely one of my favourites. The narrator was fantastic. I wish his other books were available as they seem to be excluded and only available in the USA.

Interesting book, fast moving with a lot of information. Different sites in Tokyo, which you can look up in Google Earth.
Japan post WWII is also mentioned. It is a fast moving story and it made me want to pack my bags and head for Tokyo.
I totally enjoyed the book.
The narrator, mr. Stephan Rudnicki, as usual, is a joy to listen to.
My thanks to all involved, JK.