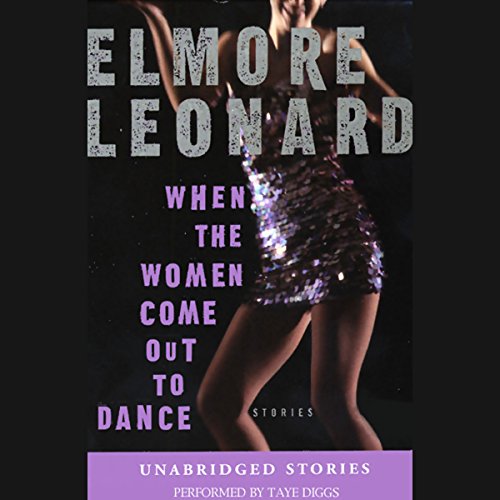 When the Women Come Out to Dance (Unabridged Stories)

The unrivaled master of crime’s first collection of noir stories....

"If you thought you knew all the places Elmore Leonard could take you, think again." (Mike Lupica)

In more than 30 books spanning half a century, Elmore Leonard has captured the imagination of millions as few writers can. A literary icon praised by the New York Times Book Review as "the greatest crime writer of our time, perhaps ever," he has influenced many contemporary writers and is known for both the quality and accessibility of his writing.

In this first collection of short pieces, including two novella-length works, since his western anthology Tonto Woman, Leonard demonstrates the superb characterization, dead-on dialogue, vivid atmosphere, and driving plotting that have made him a household name.

"The razor-edged dialogue and brisk storytelling won't disappoint." (Publishers Weekly)
"These clever, perceptive, ironic short stories by the author of Get Shorty and other crime classics boast stylistic verve and strong characterizations. Narrator Taye Diggs has a pleasant, calming sound that brings out the smoothness of the writing." (AudioFile)
"Especially noteworthy are the women in these tales, uniformly strong, funny, and complex. But perhaps Leonard's greatest accomplishment is in transforming a notoriously underread form, the short story, into something with mass appeal." (Booklist)

Once again, Elmore's wonderful prose makes you feel the places and the people with a stunning reality. Alas, third person descriptive style, although great for novels, is not best for short stories.

The stories are uneven: the best ones, such as Karen Makes Out, are great reads, but the bad ones, such as Ten Killer, just never reaches any level of excitement. I felt the Villains were too weak and the good guy lacking in motivation and style.

If you normally enjoy Elmore's realism, you should enjoy these stories

Would you try another book from Elmore Leonard and/or Taye Diggs?

I will probably not get another Elmore Leonard Book

If you’ve listened to books by Elmore Leonard before, how does this one compare?

Would you be willing to try another one of Taye Diggs’s performances?

No - voices for each character were the same and I think the reader focused on being too cool versus telling the story.

Was When the Women Come Out to Dance (Unabridged Stories) worth the listening time?

I have given up

I enjoy readers that add voices with character and some drama in their voice.

Misnomer. Book 2-1/2 is a ploy to sell more books. Because of that I have read/listened to my last Elmore Leonard book.

Several cuts were obvious and transition music played where it shouldn't have been. Aside from that it was highly enjoyable

This is a collection of stories by Elmore Leonard. Several of the stories have recurring Leonard characters: Ben Webster, Karen Cisco, and the best story in the book, which is called Fire in the Hole, is the basis for the TV series, "Justified." Taye Diggs does an excellent job of narration. His voice is comfortable and friendly. There are a number of regional American accents, particularly Kentucky and West Virginia, black and white, redneck and sophisticated urban. Diggs does them all well. He is a movie actor, and I'd be happy to hear him read more books. Fire in the Hole forms the entire basis of Justified. The story covers several episodes and many of the characters in the series. Much of the TV show, of which Leonard is the executive producer, is lifted directly from the story. Who writes better dialogue than Elmore Leonard? The main characters in Fire in the Hole are Raylan Givens, also a recurring character in a number of other books, Boyd Crowder, a guy that Raylan once worked in coal mines with, and Eva Crowder, the widow of Boyd's late brother Bowman. He is late because Eva killed him at their dinner table after suffering years of abuse at his hands. Fire in the Hole is worth the price of the book, even if you haven't seen Justified (Timothy Olyphant plays Raylan, which might motivate some of you to watch it, as he is both a great actor and incredibly handsome). I would start with the books by Leonard rather than this collection, but for many of us, any Elmore Leonard is good Elmore Leonard.

Elmore Leonard's tough, cool heroes and dialogue don't compensate for how one-dimensional his characters are, or how his plots limp to unsatisfying conclusions. Because his showdowns are always between brave, smart heroes and stupid, feckless villains, all suspense is drained from the stories.

This collection feels tired and recycled, as though Leonard was trying to create a meal out of three-day-old leftovers. He drags in characters from his novels, but doesn't give them anything fresh to do.

In two of the longer stories, the hero comes back to his home town, reconnects with the formerly-married woman whom he longed for but never slept with in high school, and winds up in the woman's kitchen facing down the leader of a group of moronic, white-trash criminals. Sure, one villain is eating fried chicken, and the other just wants a cup of coffee, but that difference hardly makes the plots distinct.

In two other stories a woman commits a crime and is then blackmailed by a person who knows about it. Yep, that's supposed to be the clever denouement.

What did you love best about When the Women Come Out to Dance (Unabridged Stories)?

Elmore leonard is a great storyteller and a wonderful writer.These were great short stories.

The only thing I had against the reader was that he often lapsed into what sounded like a black dialect when the story called for a white country dialect. It sort of detracted from the story telling in that it jarred one out of the moment.

Fantastic collection of short stories. Many that turned into some of his best novel's.
-Scribe Podcast

Elmore Leonard was the master of crime fiction and this book of short stories proves it.