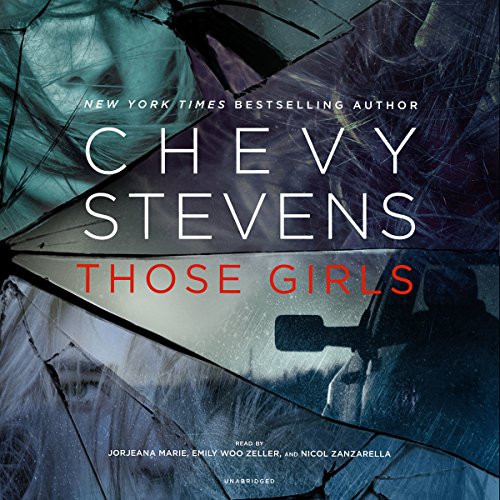 Life has never been easy for the three Campbell sisters. Jess, Courtney, and Dani live on a remote ranch in Western Canada where they work hard and try to stay out of the way of their father's fists. One night a fight gets out of hand, and the sisters are forced to go on the run, only to get caught in an even worse nightmare when their truck breaks down in a small town. Events spiral out of control, and a chance encounter with the wrong people leaves them in a horrific and desperate situation. They are left with no choice but to change their names and create new lives.

Eighteen years later they are still trying to forget what happened that summer when one of the sisters goes missing, and they are pulled back into their past. But this time there's nowhere left to run.

As much a thriller as it is a deep exploration of the bonds among sisters, Those Girls is an unforgettable portrait of desperation, loyalty, and evil.

Chevy Stevens does it again! This story unfolds at a heartpounding pace, never letting up as "Those Girls" lives wind through the years bound by a horrific trauma in their teens, haunting them, following them, stalking their minds until the time comes for "Those Girls" to relive the moments they tried to deeply bury albeit in a very shallow grave.

Redundant like the same scenes playing over and over again. Great idea though.. Characters voices were not distinct enough that they sometimes blended together. The ending made no sense because there was a chance for both of them to survive. it was like movie logic. Sorry.

raw and gritty, emotional and violent.
this realistic telling is extremely well-written but hard to listen to. I felt like I was living through the abuse with these teenage girls yet I enjoyed the over-all story. heads up!

Not good, not good at all

Do you remember being a kid and watching Scooby Doo and asking "Why are they doing that don't they know the bad guy is going to get them?"

This book is exactly as frustrating as an episode of Scooby-Doo. The characters keep doing things that make you wonder "Why are they doing that?"

The three sisters also have about as much complexity and dimension as Shaggy and Scoobs only, and this the really unforgivable part, it also includes the repeated rape and torture of teenaged girls. Nice reading. Such a waste of time and it's time you will never get back!

This story has a boring plot line and at every turn you question why on earth the characters would make the decisions they do, and then create an unrealistic "escape". The sexual violence was too much.

Wasted hours from my life

Would you try another book from Chevy Stevens and/or the narrators?

I have one and really enjoyed it BUT after this one, I'm not so sure.

What could Chevy Stevens have done to make this a more enjoyable book for you?

The first half of book was decent. Clearly she ran out of steam and ideas in the second half. I HATED this book. It was so illogical. The main characters made stupid decision that no one would ever make in the same situation. I literally stop listening twice because I was so irritated by the stupidity of the characters.

I TOTALLY agree with the Scooby Doo Review!

Stupid, frustrating with whiney narration -- I have really liked Chevy Stevens in the past -- this one is painful!

I've enjoyed this author's previous works, but was very disappointed with this book. The story was generic and predictable, and about halfway through I realized that I didn't even care what happened to the characters. I made myself finish the book, but am just glad it's over.

Just too violent for me

Would you try another book from Chevy Stevens and/or the narrators?

Did not expect such sexual violence.

Would prefer not to listen to this graphic a story.

Familial Ties All Over the Place

Still Missing by Ms. Stevens is one of the darkest suspense novels I have ever read. I was incredibly impressed by the author and the book.

Those Girls is the latest book by Ms. Stevens and while I didn't find it as compelling as Still Missing, I found it intriguing and very difficult to put down. The author did an excellent job of not just developing her characters, but also developing their relationships to each other and the roles they play in their family dynamics. Their childhood roles carried through to adulthood and once those roles were understood, the conclusion was the only logical one. I loved the sections of the book that dealt with the interaction between the sisters, especially when they were young.

The familial theme was carried over to the brothers the girls regret ever meeting and many years later it is picked back up by including their children as well.

There is a great deal of violence in this book. Parts of it were difficult to read. And even though the book tried to be somewhat redemptive in the end, the reader knows that the main characters will continue to have very difficult and sometimes tragic lives. They were simply too damaged.

I did not see the point of multiple narrators. If anything it seemed to disrupt the story rather than enhance it. But I thought the 3 narrators all did a good job.

I really tried to like his book, but I just couldn't. I made it through some of part II and couldn't take it anymore. Really predictable story line. In the first part of the book, the Narrator's voice is enough to make you want to quit right then and there. Idkkkk nothing really good to say.

Pre-ordered this book because I enjoyed her other books so much but this one definitely didn't compare. Shallow characters and improbable events. Skip this one and check out one of her other books instead.

The Past Is Never Really Past

A number of reviewers (on other sites so far) have been critical of Part 2 of the book, which is narrated by Jamie's daughter. But I find Part 2 to raise more interesting questions than Part 1 (which could stand on its own as an excellent suspense thriller novella).

What do you tell your teenager about your horrible past and her existence? I think many parents would do what Jamie did and invent a plausible lie. But when her daughter finds out, she feels betrayed and then sets out on a really stupid journey and gets herself into trouble.

But what I wanted to ask to 17-year-old Skylar is "what do think you mother should have told you and when?" When you were three? six? 15? When should a child be told that her father is a violent rapist? When should a mother share her worse nightmares with her child?

In each of the three books by Chevy Stevens I have read, she has done an excellent job of weaving together past and present, showing vividly how one event can change the entire course of your life and reverberate through it forever.