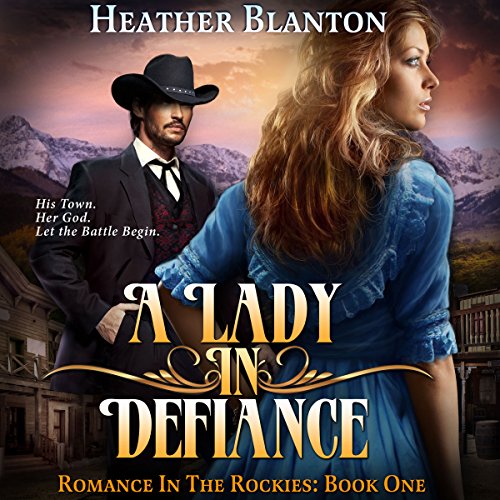 A Lady in Defiance

Written by: Heather Blanton
Narrated by: Angel Clark
Try for $0.00

His town. Her god. Let the battle begin.

Charles McIntyre owns everything and everyone in the lawless, godless mining town of Defiance. When three good, Christian sisters from his beloved South show up stranded, alone, and offering to open a "nice" hotel, he's intrigued enough to let them stay...especially since he sees feisty middle sister Naomi as a possible conquest. But Naomi, angry with God for widowing her, wants no part of Defiance or the saloon-owning, prostitute-keeping Mr. McIntyre. It would seem, however, that God has gone to elaborate lengths to bring them together. The question is, "Why?" Does God really have a plan for each and every life?

Told with gritty, but not gratuitous, realism uncharacteristic of historical Christian fiction, A Lady in Defiance gives a nod to both Pride and Prejudice and Redeeming Love. The story, based on true events, is an "ensemble" piece that deftly weaves together the relationships of the three sisters and the rowdy residents of Defiance.

Includes bonus material! Get a sneak peek at the sequel, Hearts in Defiance!

What listeners say about A Lady in Defiance

This story did a wonderful job proclaiming the gospel! I loved the redemption theme!

I am concerned about some doctrine taught by the story, namely that it isn’t the devil who comes to steal, steal, and destroy, but that God did that for His purposes. In truth, that is the devil's description. Jesus healed all who are oppressed by the devil! When God brings good out of bad situations, it doesn’t mean that he caused the bad. It disturbs me when people think that God “takes lives” in order to achieve his purposes, as if He cannot coordinate things without that. God is bigger than that! 2 Samuel 14:14 says that God does not take away a life. He doesn’t use the devil's means to achieve His will. I also think it’s very sad when people think that if you love your spouse and your children with all your heart that that is putting them before God—when it is God who commands us to love them with all our heart—and that God would take them away from us if we love them that dearly. We should love our spouse and our children with all our heart, and also nothing should be before God.

It was important that debauchery be part of this redemption story, but it was described in more detail than I care to hear. Not extensively, but more than I thought necessary.

The great example of Christians struggling and leaning on Him, and ultimately carrying out His will to reach and help others, made this story worth listening to.

This narrator was not up to the task. Although she has a pleasing enough narration voice, and her acting is pretty good, her characters' voices need lots of work. Many of the women had unnaturally high-pitched voices that sounded like a nasal falsetto. She makes them speak with an annoying staccato cadence that is halting and detracts from the emotion of the moment. When she tries to do the Spanish, Irish, Scottish, and Asian accents, she falls woefully short. Sometimes the Spanish accent sounds more Russian than Spanish. The Asian character had no accent at all. It’s like casting the wrong person for a movie role.

We pay money for good performances, and they should’ve assigned a more skilled narrator to this story.

A lady in Defiance

This is an interesting book that gets your attention early. Three sisters godly sisters move from the south to defiance. Charles Mcintyre owned everything and the sisters makes a major impact on him and the town. I was fully interested in this whole book as it takes you through There lives and problems. It gives you an idea what towns where like back then. Rose was a woman that kept the book interesting she was the mean woman that was jealous of the sisters. The sisters were everything she wasn't. They also had Mcintyre full attention. I highly recommend this book. I enjoyed it. It is easy to get caught up in the characters in this book. Heather blanton wrote a great book and Angle Clark did an excellent job narraiting this book. I was given a copy of this book but that had no influence on my review. If my review was any help will you please click the helpful link. Thank you

Ms Blanton get busy I need more Defiance! All kidding aside, this author is truly gifted. Her way of making you feel as if your right there in the thick of it is nothing short of amazing. She doesn't bore you with unnecessary description, yet you can picture everything perfectly. The story just flows so effortlessly. I'm hooked on this town called Defiance and all it's likable characters. Thank goodness for Book 2. After this one I just needed more! Now I've finished Book 2 and I still want more! Thank you Ms Blanton for a very pleasant experience.

What was one of the most memorable moments of A Lady in Defiance?

the ladys voice over for her characters was on point

If you could take any character from A Lady in Defiance out to dinner, who would it be and why?

the lady who voiced teh characters ofcourse

A lady in defiance

I truly enjoyed A Lady in Defiance. I felt that I had stepped back in time with the characters. It is an easy read and I did not want to put it down. This is my first read from this author and I look forward to more books I like this kind of historical fiction

While too actively Christian for my tastes, I can see how my mom and mother-in-law would have loved this well performed audiobook for its plot based Christian witnessing, positioned in an engaging romantic plot of three sisters who have faced life struggles before ending up in a rough mining town in 1870's Colorado.

I really enjoyed listening to this heart-warming romance! I loved the characters--Naomi Miller and her sisters Rebecca and Hannah. I even liked Charles McIntyre, the owner of the Iron Horse Saloon. Listening to the novel allowed me to hear the different voices of the characters. Rose's voice, in particular, is stuck in my head. I also enjoyed the very real struggle Naomi felt to live out her faith in a rough mining town of Defiance. I plan to find the other titles in this series and read them as well. I highly recommend A Lady in Defiance!

I enjoyed this book. it was nice to have a book that wasn't filled with offensive chatter. Looking forward to starting the next one in the series. The storyline was a Classic Western type. Thanks.

So nice to not deal with sex & profanity.
This is a sweet story a lil unrealistic, but
that’s not a bad thing.

Author is really good at making me think about judgemental pre-conceived notions we Christians often carry. This book was good!