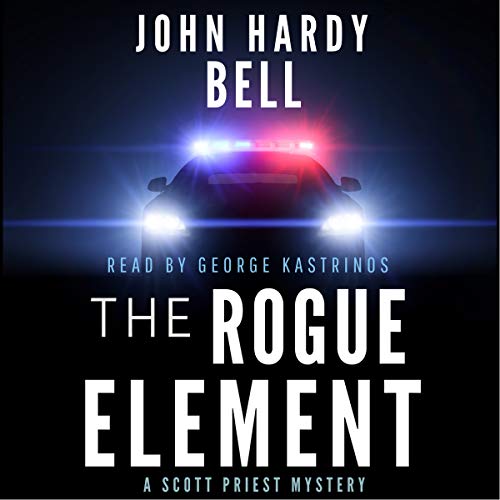 The grisly murder of a beautiful young lawyer. A political scandal unlike any the nation has ever seen. Two homicide detectives assigned to the case are shot in cold blood. And one of the police department's own stands accused of orchestrating the entire ordeal.

While the fallout has shaken the city to its core, for Detective Scott Priest, the daily business of solving homicides goes on. Today, it is the savage attack on a room attendant inside a luxury hotel suite. At first glance, the case appears routine. But for Detective Priest, nothing about this case, or this day, will turn out to be routine.

It begins with an impromptu meeting between the detective, his lieutenant, and representative from the attorney general’s office. It ends with a deadly series of events that complicates his case - and his life - in ways he could never have imagined.

What listeners say about The Rogue Element

I really did enjoy The Rogue Element. The beginning was slightly confusing for me and it took longer than expected to recognize the characters. But about 1/3 way in, I was hooked and invested in the “who done it” aspect. It was at this point the author really stepped up and made the characters real for me. He tied them together with excellent back stories and made me think “Ahh... I see now”.

I was so shocked when the book ended. I was left hanging, omg...what happens next! The author threw a curveball I didn’t expect and we’ll have to wait for Book 2 to find out the rest.

I have nothing to say about narrator George Kastrinos other than “Well done, superb” with a standing ovation!

I was given a free copy of this audiobook in exchange for my unbiased review.

The Rogue Element by John Hardy Bell pulled me in from the very beginning. I loved how the author wrote the twists in the book, and my jaw nearly dropped at the ending. I hate giving away spoilers in my reviews, so with that said, this book is awesome! The backdrop of internal affairs going after corruption was so realistic. I loved how the main character had the dilemma of who to trust and who to watch out for. Police procedurals have intrigued me, and this book is no different. The narration by George Kastrinos was well done. He was able to perform distinguishable voices for the various characters. I requested this review copy audiobook and have voluntarily written this review. I will definitely listen to more books by this author and narrator.

Tense! Well-written. I didn't want it to end!

George Kastrinos did a great job narrating. He brought the characters to life.

Scott Priest comes from a family of cops; his father and brother. Scott is one of the good ones and stands by his fellow detectives until the events of one very tragic day. Scotts superiors believe there is corruption in the ranks and have asked him to spy on them which he is not keen to do. While investigating the murder of a hotel maid on this particular day , he begins to believe the allegations and he starts to doubt everyone, including his partner. This is my kind of book and I enjoyed listening to every moment. The storyline and characters were great, and the narrator did an excellent job. I do hope this series continues. I was given this free review copy audiobook at my request and have voluntarily left this review.

I received a free copy of this book in exchange for an honest review.

This is the first volume in a series. At first glance it may seem to be only a police procedural but it is also a story about a police family -- where the father and his two sons are/were police officers, possible corruption within the force, a romance and a murder mystery. Scott Priest is a detective with the Denver Police Department -- a Department where his father was an officer [now retired] and his brother was an officer who was killed on duty. So Priest has a lot to live up to as his family is highly regarded within the force. For me, the murder mystery and the possible corruption angle in this book are well done but pretty standard. What intrigued me about this story is the main character Priest and his family -- there is a lot to unravel here. His father is suffering from Alzheimer's. Priest's brother's law enforcement work and death on duty and how that affected his family is certainly a long dark shadow which Priest believes he cannot fully rise above. I wish more time had been spent exploring the family dynamics, however, I think that might be delved into further in future volumes. This is a quick and interesting read -- but be warned, it ends on cliffhanger. I will be continuing with the series.

The narrator, George Kastrinos, did a very good job. Without giving anything away, I especially enjoyed the narrator's tone in conveying the conversation Priest has with his father near the end of the book.

Holy heck was this a good book!

This. Book. Was. Awesome.

You never know what you are getting when you start a series but this book scored on every level!!! With the intro of the main characters, you get some slightly shady good/bad guys, and a family history that threatens to be deliciously sinister. The murder of the hotel maid was just one aspect of the serious intrigue and I cannot wait for the next book.

The narrator was equally awesome. I loved his voice and he was just as responsible for my love of this book as the written word.

The ending sets up nicely for the next installment and I can not wait.